The listed media sector on the JSE is – and will continue to be – dominated by Naspers, a company whose local media assets are dwarfed by its global internet businesses, spanning classifieds, e-tail, food delivery and payments, as well as a sizeable holding in $440 billion Chinese internet giant Tencent. In mid-July, Naspers had a market cap of R1.5 trillion, making it the second-largest on the JSE after AB-InBev (at R2.1 trillion) – more than 23 times the combined market cap of the four other companies in the media sector.

Naspers’ major asset is a 31% holding in Tencent. This alone was worth R1.8 trillion at the end of June, meaning that investors place zero (technically negative) value on the remainder of the group’s assets. This disconnect between its market valuation and the value of its underlying assets has led group CEO Bob van Dijk to work actively to unlock the discount, which the group estimated at nearly 45% earlier this year.

This first move was to unbundle its MultiChoice pay TV assets in March. Naspers no longer owns any shares in this business, now separately listed on the JSE and valued at R59 billion. The Naspers share price didn’t move upon the unbundling, something that Nadim Mohamed, investment analyst and partner at First Avenue Investment Management, says is positive given that it ‘appears to have unlocked value for shareholders’.

A far bigger move was announced by the group in March: it would list its international internet assets on Euronext Amsterdam, with a secondary, inward listing on the JSE. This new entity, to be called Prosus, will be approximately 73%-owned by Naspers. It comprises stakes in Tencent and mail.ru, as well as its classifieds, payments, e-tail and food-delivery businesses. These include well-known companies such as OLX, Avito, Swiggy, DeliveryHero, MakeMyTrip, PayU and letgo. The listing is slated for September 2019. 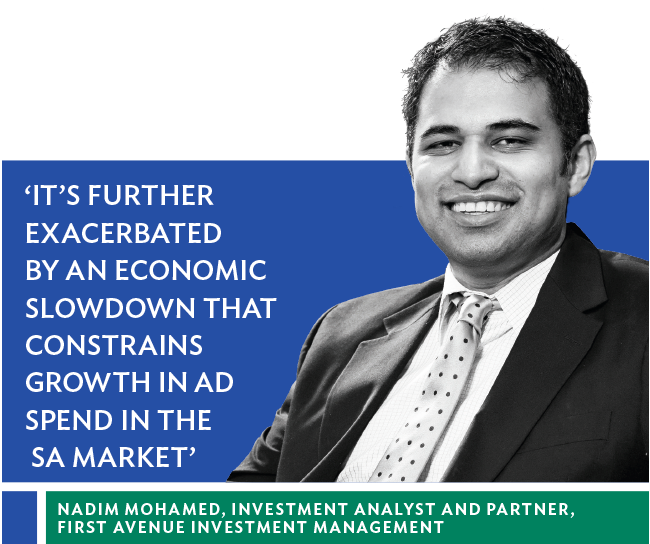 Mohamed says that while ‘the listing of Naspers’ international assets is a step in the right direction, it is unlikely to be a “silver bullet” in terms of unlocking the discount. Crucially, the listing is big enough to warrant Naspers’ inclusion in several European and global indices, which will attract passive and active fund flows. It will also create greater awareness of Naspers as a leading internet company by international investors’.

Naspers will remain on the JSE, holding the sizeable stake in Prosus, nearly all of Takealot and a majority stake in the historic core of the business, Media24. Mohamed says the size of the Prosus holding ‘will likely not reduce its weight on the major JSE indices sufficiently to solve the problem of its high concentration in these indices’.

While almost insignificant within Naspers, Media24 remains a sizeable business. In the year to end-March, it reported revenue of R4.7 billion. It publishes a number of well-known brands, including Daily Sun, Rapport, Soccer Laduma, City Press, You, Huisgenoot, DRUM, News24 (and associated titles, such as Health24 and Food24) as well as Business Insider (SA). It also runs the VIA lifestyle TV channel on DStv, and owns 50.95% of online fashion retailer Superbalist, following the merger of its property Spree into the business.

Pay TV group MultiChoice – unbundled from Naspers – is a sizeable business on its own, comfortably within the 40 largest companies by market cap on the JSE. It reported a 6% revenue increase to R50.1 billion in the year to end-March and while perception, particularly in developed markets, is that the pay-TV sector is in decline, added 1.6 million customers to end the period on 15.1 million active subscribers (7.4 million in SA, 7.7 million in the rest of Africa). The bulk of these new customers (1.1 million) was in its 49 markets outside of SA, most at the lower end of the market. Its two major competitors across the continent are StarTimes and Canal Plus Afrique, but the group says its subscriber base is more than four times larger than each of these. 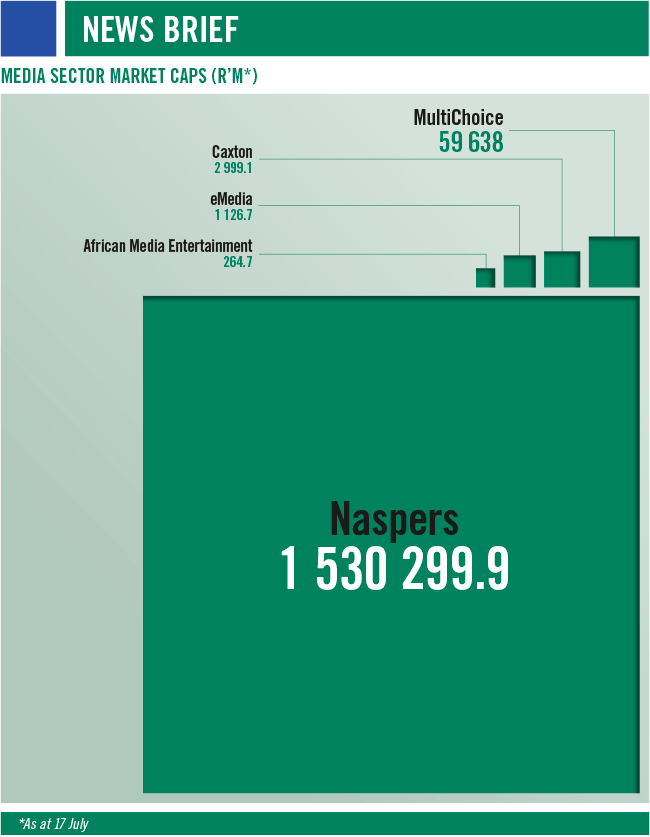 Outside of SA, MultiChoice operates a digital terrestrial TV (DTT) network, GOtv, in 10 markets. While the number of active subscribers outside of SA has overtaken the number in its home market, that operation is not yet profitable. In the 2019 financial year, it reported a trading loss of R3.7 billion (a near R1 billion reduction from the prior period). The group’s overall trading profit was R7 billion, and it continues to generate a healthy cash flow (R3.3 billion last year). Across the continent it continues to cater for the near-insatiable demand for local content. In the past year, it produced 4 600 hours of local content (excluding sport), comprising 40% of total general entertainment content spend.

Besides traditional pay TV competitors, MultiChoice is facing threats from so-called ‘over-the-top’ (OTT) players such as Netflix, particularly at the upper end of the market (think DStv Premium). Its response has been to offer on-demand and live content via DStv Now, and online video subscription service Showmax. It estimates its connected user base across these two DStv platforms is 1.6 times the size of Netflix. Mohamed says this positioning, where its content is available via streaming, is positive but that ‘the trend will unravel slowly in its local and Rest of Africa markets’ due to the high cost of internet connectivity.

‘The business appears to be making the correct moves in terms of focusing on local content to defend itself against the likes of Netflix. However, we believe that the competition from OTT will impair returns on capital over the long term. In the medium term, the company is well positioned to deliver positive dividend growth over the next few years given its dominance of the industry.’ MultiChoice has said it intends to declare a dividend of R2.5 billion to shareholders at the end of this financial year.

The group maintains there is still significant room for growth, with 13 million ‘addressable pay TV households’ in its home market, and 27 million across its other markets. By 2022, it says this number will have increased to a total of 46 million. According to Mohamed, the business ‘offers good, strong free cash-flow generation as their Rest of Africa business improves. However, it faces multiple regulatory and disruptive forces that may constrain its profitability in the future’.

The other major TV operator in SA is also listed on the JSE – eMedia Holdings owns a controlling stake (67.69%) in the country’s only private commercial free-to-air TV channel, e.tv; a number of satellite TV channels on DStv including 24-hour news station eNCA; as well as Platco Digital, which operates the Openview HD satellite TV service. This means that it is both a supplier to and competitor of MultiChoice.

In the year to end-March, the group reported revenue of R2.4 billion, of which R1.6 billion was advertising revenue at e.tv, while Openview (which also operates the group’s six other channels) generated R131.8 million in advertising revenue. Openview, which offers free satellite TV with only an upfront payment for the decoder, has 1.57 million active customers. It remains loss-making, but the group says Openview provides it ‘with strategic flexibility and is part of our plan to address the challenges of the impending digital migration transition’. Its share of the total TV audience in the country is around 4%, and the group estimates it needs this to be 6% in order to break even. Overall, it says, the ‘television market is facing numerous technology and viewership challenges’. Despite this, it gained market share last year, with e.tv achieving a 19.2% share of prime-time viewers, from 15% a year before.

Caxton and CTP Publishers, Printers and Distributors is one of the ‘largest publishers and printers of books, magazines, newspapers and commercial products in South Africa’, according to its website. It publishes a daily newspaper, the Citizen, and is the largest local-newspaper publisher in SA, with 120 titles. It also publishes a dozen well-known magazines. Of the R3.4 billion in revenue for the six-month period to end-December, 61% is derived from its publishing and printing business and 38% from its packaging and stationery unit. It has diversified into this area in recent years. 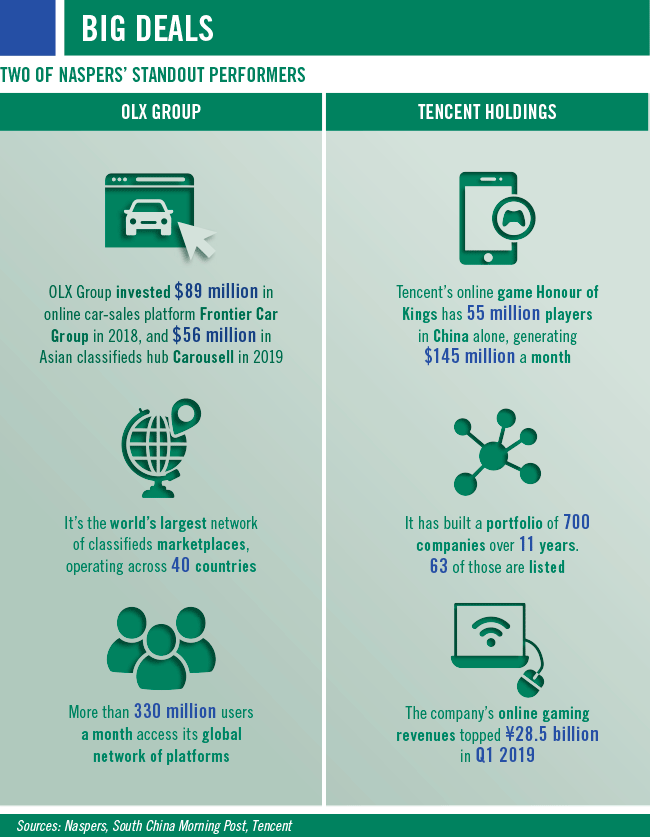 In 2017, it purchased a controlling stake in the second-largest property portal in the country, Private Property. Last year, as part of a ‘strategy to separate the group’s investments in digital technology platforms from the legacy print business’, it sold that business to JSE-listed Cognition Holdings, in which it already owned a sizeable stake. Following the transaction, its shareholding in Cognition increased to 63%. Caxton says it will look to inject other digital assets into Cognition in time.

The smallest of the listed media companies is African Media Entertainment. It owns specialist radio sales house United Stations, media agency Media Heads 360, financial news outfit Moneyweb and three radio stations: OFM, which broadcasts across the central part of SA; Algoa FM, which broadcasts to the Eastern Cape and Garden Route; and Classic 1027 in Gauteng. The group generated R273 million in revenue in the 2019 financial year.

While not listed in the media sector on the bourse, Tiso Blackstar Group owns the country’s largest listed print-media business. It announced in June, however, that it will dispose of its media assets for R1.05 billion to privately held Lebashe Investment Group. These assets comprise well-known brands such as Sunday Times, Business Day, Financial Mail, Sowetan, Daily Dispatch, the Herald, Business Day TV, the Home Channel and Ignition. Radio broadcast assets, including KwaZulu-Natal-based Vuma FM, Mpumalanga-based Rise FM, and shares in stations in Nigeria, Ghana and Kenya, are also part of the transaction. Tiso will retain as its core asset Hirt & Carter (a retail solutions provider for marketers and brands), once the media businesses are disposed of in November.

Mohamed says that, with the exception of Naspers and MultiChoice, the other listed media companies have underperformed the market over the past five years. He points to ‘business models that are becoming less relevant due to disruptive forces’ (in the case of print media, for example) and, in certain instances, ‘poor capital allocation by management’. He says this outcome ‘is further exacerbated by an economic slowdown that constrains growth in ad spend in the South African market’. Any sustained rebound in the SA economy will see improved fortunes for the sector.