When the Springboks play a test match, the players wear GPS location trackers and are filmed from at least four different, time-coded camera views. Every move, pass, tackle, scrum, line-out, kick and try of SA’s national rugby team is converted into data, providing in-depth performance statistics of every match phase and each individual player. Data analytics have been a game changer for sports worldwide, including in SA, and they’re also rapidly gaining momentum in business organisations across nearly every sector.

‘Sports are our petri dish to understand how analytics, if effectively deployed, can lead to better decisions and more successful organisations,’ says Ben Shields, a lecturer in managerial communications at the Massachusetts Institute of Technology (MIT) Sloan in the US. ‘Although analytics in sports may seem different from other industries, the similarities are stronger than they appear.’

Be it the Boks, the Protea cricketers, the Bafana Bafana soccer team, SA’s rowing crew or individuals such as Olympic runner Caster Semenya and swimmer Chad le Clos, the analysis of data enables athletes to fine-tune their performance, iron out weaknesses, get to know their opposition and, (through biometric and wearable technology) maximise fitness, reduce injuries and extend their careers. And in some sports, real-time number crunching provides the edge that eventually decides between winning and losing. 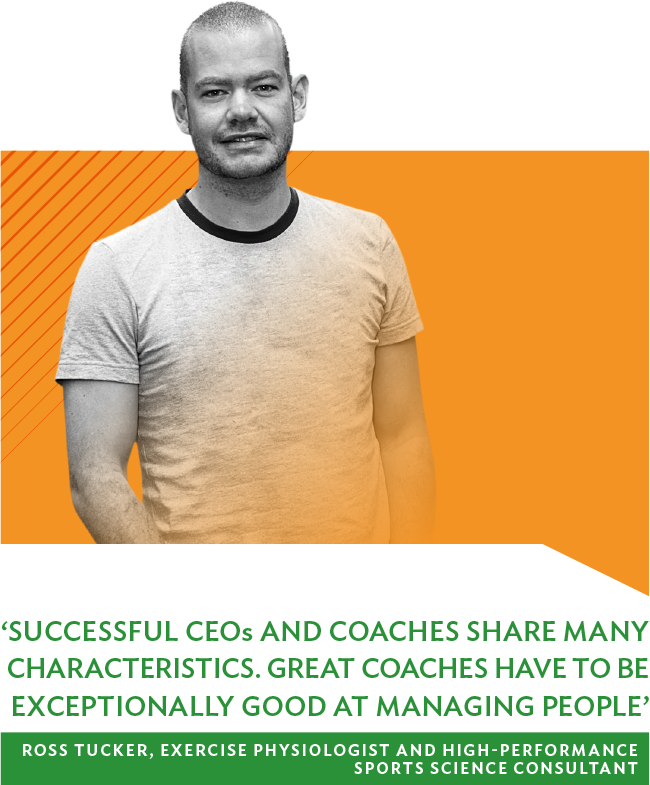 Here Formula One is a prime example with its fast and furious data generation, where pit crews and analysts use live data feeds to coach their driver according to the best racing conditions. Cycling is another example. However, more about this later.

Sports analytics shot to fame in 2011 when a movie starring Brad Pitt popularised the concept. The Hollywood film Moneyball tells the true story of a coach who used an analytical, data-driven approach – called ‘sabermetrics’ after the acronym SABR (Society for American Baseball Research) – to lead the Oakland Athletics baseball team from obscurity to victory. The story’s premise looks at the power of empirical analysis in turning low-budget baseball teams into winners by selling over-valued players and buying under-valued ‘hidden gems’.

‘Baseball lends itself to analytics because it’s a four-hour long series of discrete events: there’s a pitch and a hit, a pitch and a hit. They’re basically static, isolated events,’ says Ross Tucker, a Cape Town-based exercise physiologist and high-performance sports science consultant.

‘It’s more difficult to apply analytics for continuous matches such as football, rugby or cricket. A number of sports started using the Moneyball approach when the film came out, although some had to back-pedal a bit because they initially drowned in data.’

Analytics – whether in sport or in business – should result in a data reduction rather than adding to data overload, says Bill Gerrard, business and sports analytics professor at Leeds University Business School in the UK. He blogs about working with a European football club where for every game in the domestic league he receives spreadsheets with around 7 500 rows of detailed data covering every action in the game. ‘I also receive around 200 metrics on every player who has played. My task is to reduce all of this data to a game report with summary tables, accompanying graphics and a single page of key points.’

As an analyst, Gerrard has to distil the data mass into what he calls the ‘informative signal’ versus the ‘meaningless noise’.

Data analytics have not only revolutionised athletic preparation and performance, but they’re also bringing sports events closer to the spectators. 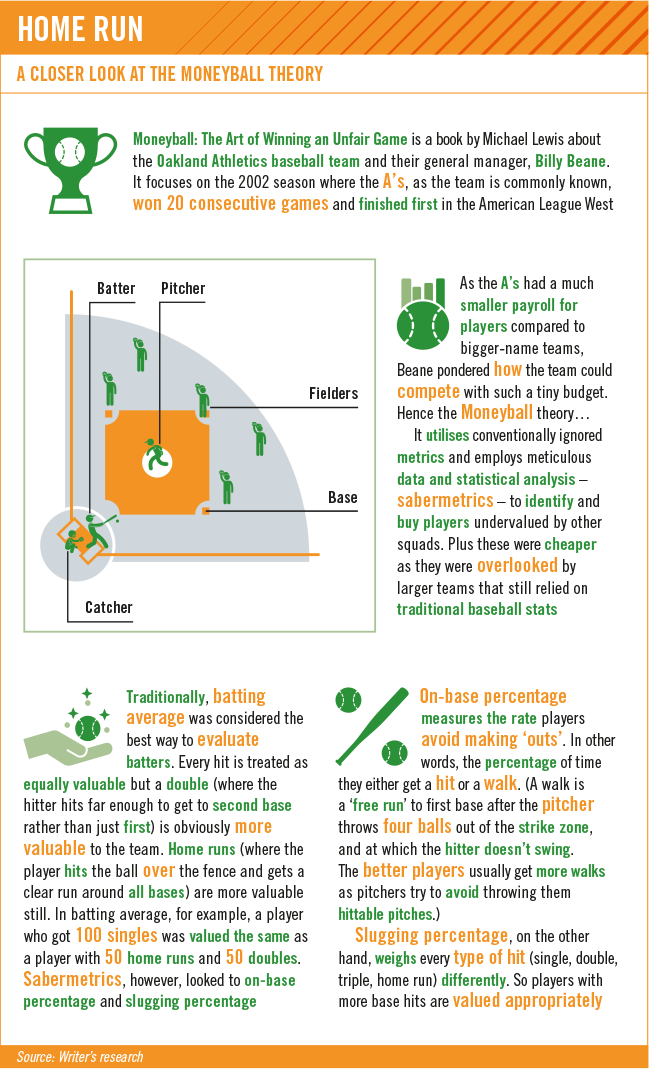 The Tour de France serves as a case study of a traditional sporting brand that has used data and digital transformation to create a modern fan experience that could teach businesses a lesson about customer-relationship management. Companies could also learn from the innovative spirit and agility of the historic road cycling event, which in 2017 pioneered an analytics solution that created and analysed more than 3 billion data points. The cyclists have GPS-based tracking devices under the seat of their bike that produce real-time data reflecting the speed of each rider, their position in the peloton and the distances between riders.

‘The data analytics platform, hosted in Dimension Data’s cloud, now incorporates algorithms that combine live-tracking data, third-party data and historical data to give followers a new level of insight at every stage,’ says Scott Gibson, digital practice group executive at Dimension Data. As he explains on the company website, ‘across many industries, organisations have begun to realise the power and control they can gain by connecting the physical realm – equipment, computers, sensors – to digital systems’.

In some hospitals, he adds, ‘the internet of things has helped give patients a more human experience. And in community policing, it even helped to make major sporting events like the Tour de Yorkshire [cycling race] safer for the community and the riders alike’.

Closer to home, SA corporates are also increasingly embracing digital technology and data analytics. While a 2015 study by tech consultancy Strategy Worx found that SA lagged behind globally in the use of big data (due to a lack of understanding at an executive level), there has been significant progress in the past two years, with financial companies leading the way, followed by telecoms.

‘Analytics used to be a specialised, exotic field but are now becoming part and parcel of doing business,’ says Steven Ambrose, Strategy Worx CEO. ‘A lot of South African companies are using the latest software, such as SAP, which automatically embeds data analytics.’ He adds that cloud computing and artificial intelligence (AI) are replacing the conventional ‘gut feeling’ by augmenting, assisting or superseding the knowledge of executive boards with deep insights based on data.

However, although algorithms and AI may assist in eliminating bias and emotion from certain decision-making processes, the business (and sporting) world will continue to have a need for skilled humans. ‘In my research, I’ve consistently seen that the most successful data-driven organisations have two essential types of talent – analytics staff and leaders that can manage an analytics transformation,’ says Shields. Organisa-tions need both to succeed to translate data into action and realise their full potential.

In order to successfully lead a team – be it in sport or business – there needs to be someone at the top with high emotional intelligence and the ability to understand the small picture and the big picture simultaneously, according to Tucker, whose client list includes the 2009/10 World Series-winning SA Sevens rugby team, SA Kayaking, SA Triathlon, USA triathlon, the UK Olympic Committee and, most recently, World Rugby.

‘Successful CEOs and successful coaches share many of the same characteristics,’ he says.  ‘Great sports coaches have to be exceptionally good at managing people, which requires emotional skill and intelligence as well as a high degree of technical skill. You’re juggling detail with strategy, which is challenging.’

When it comes to teamwork, business still lags behind sport, says Tucker. ‘The leadership and emotional aspect of bringing diverse people together is a higher priority in sport than in business. When you’re coaching football, cricket, rugby or anything else, you need to foster team cohesion and understanding between team mates, because the consequences of not achieving this are immediate and obvious – you lose the match. In business, your feedback is delayed and more difficult to measure.’

Another difference is that business generally isn’t a ‘zero-sum’ game. For example, says Tucker, ‘you can have several banks that are all doing well, whereas in sports the success of one team means there’s less scope for the success of others. It’s all or nothing. You can only have one Olympic champion, one world champion’.

Uri Gal, associate professor in business information systems at the University of Sydney, puts it like this (in his article in the Conversation): ‘Sporting competitions have a small and finite number of outcomes. The rules that govern athletes’ actions are known, accepted, explicitly enforced and stable. Success is easily defined in terms of points, wins and championships.

‘Compared to sports, business environments are equivocal, unstructured and dynamic. There are many possible measures for organisational success – profit, growth, market share, stock value – which cannot be easily traced back to the performance of individual employees.’

Back to Shields, who refers to sports analytics as a petri dish from which all types of other organisations can learn. He advocates creating a transferable framework for organisations in other industries and is behind MIT Sloan’s annual sports analytics conference, which has grown from 175 participants in 2007 to 3 500 participants (and 650 000 people following via live streams) in 2017.

Meanwhile, sports teams are increasingly following business principles – developing their brand, merchandising, digital content, ticket sales and stadium experience. ‘Sports organisations that have built profitable businesses have expertly understood the variability in their on-the-field product and implemented strategies to withstand the inevitable periods of losing and maximise their moments of winning,’ says Shields.

Much has been written about mental toughness, discipline and learning from failure. Gauteng-based certified financial planner Anton Swanepoel uses his book, titled Business Lessons from the 2015 Rugby World Cup, to teach entrepreneurial thinking. He draws parallels between Japan’s surprise defeat of the Springboks and a small business competing against a large company. 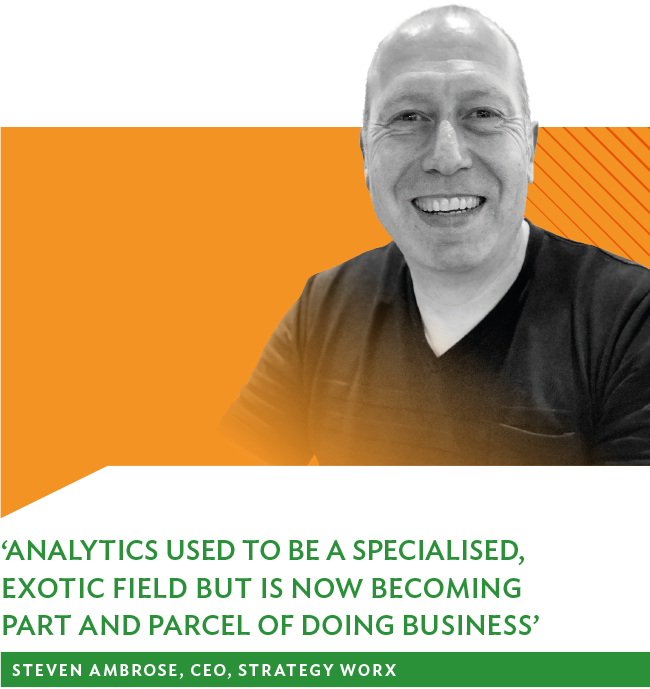 ‘Japan was by far the weaker team and everybody expected them to lose,’ he says. ‘So they changed their strategy away from the physical game that the Boks expected to a new, faster and more agile style that they executed to perfection.

‘Translated into a small business environment, this means you can’t compete with big brands at their level, but you may be able to differentiate yourself if you focus on your specific strengths.’

Some sports serve as particularly good examples for business. Tucker says that technical sports such as American football show the division of labour and specific expertise.

‘There’s one person whose job it is to teach a player to kick a ball, and another person who’s only there to throw a ball. That specificity and precision always impresses me.’

Cycling and endurance sports, on the other hand, teach long-term planning, which is essential for both a good coach and a good CEO, who have to plan well past their own tenure. This is possibly the most fundamental lesson that business and sport share, and that is before even tapping into GPS tracking, analytics and brand building.

To have transformational, visionary leaders (CEO/coach) who are able to instil a common purpose in the workforce/team and think beyond their personal gain in order to win remains the most potent game plan of all.