UP IN THE AIR - JSE MAGAZINE

For tech geeks and online shoppers, it felt like an early Christmas present. In December 2013, Amazon.com founder Jeff Bezos revealed the global e-commerce giant’s latest top-secret R&D project. Bezos called it Prime Air: a plan to deliver packages to customers within 30 minutes of them ordering it online at Amazon.com, via a network of unmanned aerial vehicles. At the time it sounded like science fiction, but as the drone market has grown, Prime Air has become less a pie-in-the-sky daydream and more an idea – and technology whose time has arrived.

‘One day Prime Air deliveries will be as common as seeing a mail truck,’ Bezos told the Telegraph. ‘The technical problems are very straight ahead. The biggest issue, or the biggest thing that needs to be worked on, is the regulatory side.’ Indeed, the technology is already here – and it’s giving us a spectacular new perspective on the world.

A YouTube clip published in May 2014 (which now has more than 14 million views) shows the view from inside an aerial fireworks display, as seen through the lens of a GoPro Hero 3 camera fitted to a DJI Phantom 2 quadcopter.

It would be missing the point to talk about the ‘future’ of drone technology – that future is already here. The US Federal Aviation Administration (FAA) estimates that, within the next decade, the private drone industry will be worth about US$90 billion. That’s an impressive number – even more so considering that many of the drones taking to US and SA skies are breaking the law.

Drones have, of course, also been used to devastating effect by the US military but for hobbyists, they are wonderful toys. You need hardly any experience to fly one, you don’t require a licence, and the machines can pretty much pilot themselves.

They’re fun to play with but as soon as you start using drones to make money, you’ll quickly find yourself tied up in reams of legal red tape. 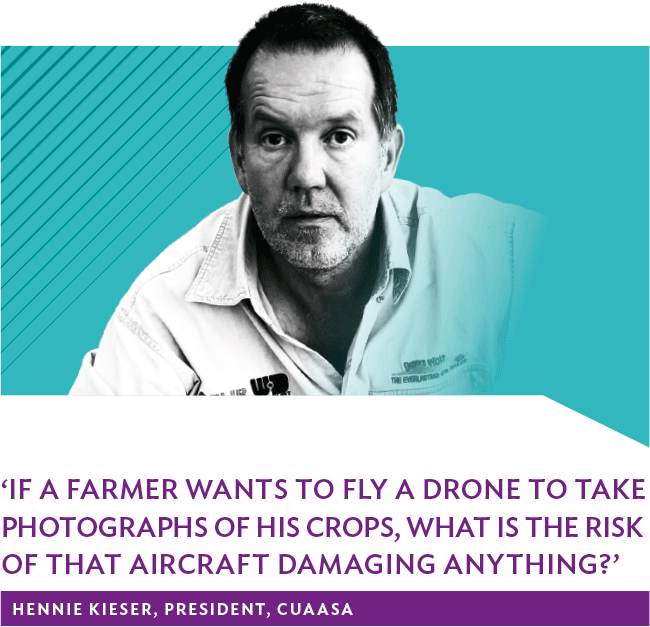 Last July, SA’s Ministry of Transport introduced 29 pages of regulations governing the use of drones. Under the new law, if you want to operate it for anything other than private use, the drone must be approved and registered by the SA Civil Aviation Authority (CAA); the operator must have a special pilot’s licence (which requires medical certification, English proficiency, flight training and certification of radiotelephony); and the operator must have passed both a theoretical exam and a skills test. That licence is then valid for 24 months.

The new regulations have not, it’s fair to say, been well received by the industry. As news website Quartz put it, in SA ‘it’s now easier to play with drones than it is to make money with them’.

‘It’s very easy for anybody in South Africa to play with a drone,’ he says. ‘You can do it as a hobbyist. But the minute you want to use it for commercial applications, it’s a nightmare.’

Kieser describes the writing of the legislation as being ‘a fairly complex process’. It involved the industry sitting in a workgroup with the CAA to compile feasible and workable legislation, which refers to technical standards.

‘So for example, it will say you’re not allowed to speed. How you measure the speed and how you implement that will be determined by the technical standards,’ he says. ‘The agreement was that once we’d done the regulation component, we would reconvene the workgroup to finalise the technical standards. But the CAA decided, independently, that they weren’t going to do that. So they are now using their own technical standards, which are a problem to be honest, because we feel they do not have the technical expertise.’

For evidence of why those regulations are necessary, we return to YouTube. This time it’s a clip of alpine ski racer Marcel Hirscher competing in December 2015’s ski World Cup. As Hirscher slaloms down the piste, a Cinestar 8 hexacopter loses power and falls out of the sky, crashing barely two metres behind him. 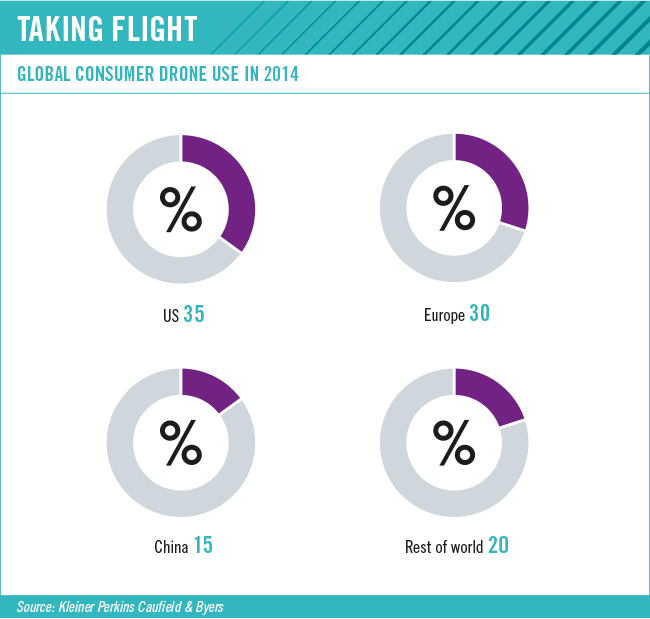 In the US, a recent report by Bard College’s Centre for the Study of the Drone found that more than 300 incidents classified as ‘close encounters’ occurred between drones and manned aircraft in US airspace over a period of less than two years.

A total of 921 instances were reported during the study’s time frame. The majority took place within 8 km of an airport, and more than 90% took place above 120m – both being violations of FAA safety guidelines.

Kieser, who understands the safety concerns, offers a counter-argument based on simple practicality. ‘If a farmer wants to fly a small drone with a camera mounted on it to take photographs of his crops, what is the risk of that aircraft damaging anything?’ he asks.

‘If that same farmer is a rhino farmer, and he wants to fly from 10 pm to 4 am, when poaching is active, what’s the risk that he’s going to fly into another aircraft or hurt someone on the ground? It’s pretty much zero, except maybe for the poacher. But still, the CAA will not allow night flights.’

Last year, the CUAASA commissioned economist Roelof Botha to do a baseline study on the possible economic impact of commercial drones. Botha found that if 60 medium-sized companies were allowed to operate, they could inject at least US$40 million per annum into the SA economy. The demand, however, is much greater than just 60 companies. ‘We had a workshop with those companies last May, and they were the ones that urgently wanted to get their licences,’ says Kieser.

‘Today, we’re lucky if eight of them have made it through the approval process. But I can guarantee you, there are another 600 companies or private individuals who are currently using drones – for photography, mining, building inspections, agriculture and so on – who don’t want their names to be known, because they know that the moment the CAA knows about them, they’re going to demand that they also get licences.’

Meanwhile, governments and businesses around the world are getting their heads around the potential of drones to revolutionise the way they operate. Afrotech, an African innovation project set up by the Swiss research university École Polytechnique Fédérale de Lausanne, is already considering ways to use cargo drones to bypass the continent’s limited transport infrastructure.

‘Since Africa is growing too fast to build out its road network, some transportation will have to be supplemented from the sky,’ according to the organisation’s website. ‘Afrotech believes Africa will be the first continent to build out unmanned air cargo at massive scale.’

This year Afrotech will start testing cargo drones capable of delivering small packages across distances of up to 80 km. ‘One of the first use cases will be to fly units of blood from a blood bank to health clinics,’ says the organisation. ‘By bringing blood to severely anaemic young children and mothers, as well as to trauma patients, the route will prove that flying robots can save lives and improve outcomes.’

As SA’s drone industry irons out its legislative issues, companies such as the Knysna-based SteadiDrone continue to service the growing international market. ‘Because our drones are open payload, you’re able to fly just about anything for any industry,’ says SteadiDrone’s Jason Fry. ‘Drones have applications like GIS [geographic information system], surveying, mapping, agriculture, search and rescue, inspections, photography… The list goes on.’

He adds that most of SteadiDrone’s clients come from the media and security industries. ‘But drones are being used around the world in weird and wonderful ways, from Doctors Without Borders to postal services delivering post to islands, or for searching a cliff at night for stranded hikers,’ he says. ‘The opportunities are endless.’